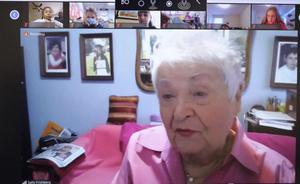 As part of a Historical Fiction unit, 5th graders in Westfield Public Schools read "Number the Stars" by Lois Lowry, a historical fiction novel that follows a friendship between a Jewish girl and a Christian girl in Copenhagen and their journey to freedom during World War II. Recent virtual presentations on the Holocaust provided students with important real-life context to these classroom experiences.

As part of a Historical Fiction unit, 5th graders in Westfield Public Schools read Number the Stars by Lois Lowry, a historical fiction novel that follows a friendship between a Jewish girl and a Christian girl in Copenhagen and their journey to freedom during World War II. Recent virtual presentations on the Holocaust provided students with important real-life context to these classroom experiences.

“Six million Jews were killed in the Holocaust. That is a statistic,” said Mr. Fleischmann as he showed the students a picture of his beloved aunts and uncles during his virtual presentation.  “These aunts and uncles took care of me every summer.  They were close to me.  They made sure I was okay.  [All but two] were killed in concentration camps. Their only guilt was that they were Jews.  They are not statistics. They are persons who were close to me, with personalities, who took care of me.  I miss them to this day.”

The journey from Czechoslovakia took Mr. Fleischmann, his parents, and older brother to Germany, France, Spain, Portugal, Cuba and finally to New York City.  While at the French-Spanish border, a stranger intervened to save the family from having to remain in Nazi-occupied France.

“We survived because a total stranger saw something happening that he did not feel was correct and came to our assistance,“ said Mr. Fleischmann who explained that his father’s name had appeared on a list of people who fought against the Nationalists during the Spanish Civil War.  “This stranger put us up for the night and explained to the police chief that the Paul Fleischmann on the list was not my father.”

This misunderstanding was cleared up and the family was able to continue their journey, said Mr. Fleischmann who works with the Holocaust Council of the Jewish Federation of Greater Metrowest New Jersey to share his experience with students.  The Tamaques 5th grade team of teachers Marisa Truselo, Victor Alfonso, Nicole Barbuto, and Lori Swanson worked with the Holocaust Council to arrange the virtual presentation.

“Every day I work with survivors to bring their stories to students like you. I hope and pray they are here to tell their stories for many, many years to come,” said Ilyse Shainbrown, Director of Holocaust Education at the Holocaust Council.  “You are probably the last generation to meet with a Holocaust survivor, to meet them face-to-face and hear their story. Think of somebody you will see or speak to in the next 24 hours – your parents, siblings, a friend – and please promise to tell the story of Mr. Peter Fleischmann to that person.  If we each tell that story one time, we double the amount of people who hear his story.”

“The lesson I would ask you to learn from my story is not necessarily the details of my story but that, in your lives, you cannot go through life with a blind eye or deaf ears,” Mr. Fleischmann added.  “Don’t stand by and allow something to happen that shouldn’t be happening. Don’t do something that you shouldn’t be doing.  Don’t be a bystander.  Be an upstander.”

A stranger also saved Holocaust survivor Sally Frishberg and her family.  McKinley 5th graders welcomed her for a virtual presentation on March 18.

“Our 5th graders continued a tradition, albeit in a different way, by listening to and learning from Mrs. Frishberg,” said McKinley principal Dr. Marc Biunno in an email to the school community.  “Mrs. Frishberg joined our fifth grade classes remotely and took them through her story while she urged them to be the sorts of people who do the right things on behalf of others.”

Born in Poland in 1934, Mrs. Frishberg shared her experiences as a young child whose family was forced to flee their home in Poland when the Nazis invaded their village.  She and her family were taken in by a Polish farmer and hidden in his attic for two years.

“He was the man who saved us,” Mrs. Frishberg told the students.  “He was an extraordinary man who never gave up helping us.”

After the war ended, the family eventually immigrated to America.  Mrs. Frishberg, a former high school teacher, was awarded the Yavner Award for Excellence in Holocaust Education in 2005 and now speaks regularly to students.  A mother and grandmother, she encourages her audiences to choose kindness over hate.

“These differences between us are very small. They don’t matter,” she said. “You reduce the value of your life when you hate.”

“After traveling at night and living in an attic for two years to escape the Nazis, Mrs. Frishberg has taught us to help others through kindness,” said McKinley 5th grade teacher Ann McDonough who organized the virtual program with fellow teachers Nicole Giles, William Hannis, and Joseph Paradise.  “Without the kindness of others, she and many others would never have lived.  Never give up hope. Hate hurts but love heals.”

Asked about Mrs. Frishberg’s presentation, 5th grader Dominick DiDario said “Hate is never the answer and growing up with that can lead to disastrous things like Hitler.  It made me feel encouraged to be more thoughtful.”

“Mrs. Frishberg made a point to highlight the ideas of strength, perseverance, and courage,” Biunno added.  “As I listened to her, I thought of perspective and how certain experiences can rock us out of current troubles in order to appreciate where we are and how we live.”

The McKinley 5th grade team and their students also made a virtual field trip to the Museum of Jewish Heritage in Brooklyn, New York on March 10.

The museum is “a living memorial to the Holocaust,” said Gallery Educator Lisa Hunter as she shared some of the museum’s artifacts virtually.  “It’s very important that we keep the memory alive.”

“We are grateful to Mrs. Frishberg, Mr. Fleischmann, and others who share their stories with our school community, reinforcing the common message that hate cannot and will not be tolerated anywhere.”

Photo 1 Caption:  Holocaust survivor Peter Fleischmann answers questions from Tamaques 5th graders after sharing his story of courage and survival on March 26. Fleischmann and his family fled Nazi-occupied Czechoslovakia in 1941 when he was 14.

Photo 2 Caption:  Holocaust survivor Sally Frishberg brought a message of hope and strength to 5th graders at McKinley School on March 18. Born in Poland in 1934, Mrs. Frishberg shared her experiences as a young child whose family was forced to flee their home in Poland when the Nazis invaded their village. She and her family were taken in by a Polish farmer and hidden in his attic for two years.

Photo 3 Caption:  McKinley 5th graders learn about Nazi propaganda during a virtual field trip to the Museum of Jewish Heritage on March 10.