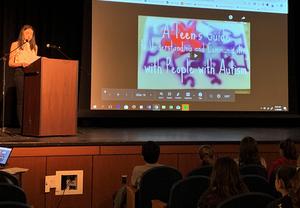 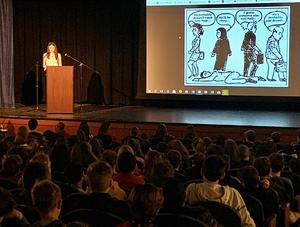 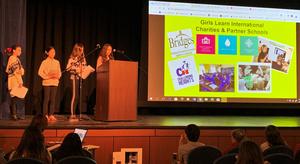 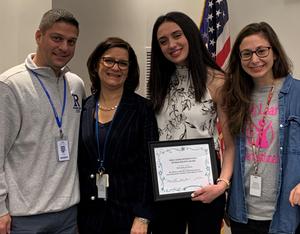 Human dignity was the recent focus at Roosevelt Intermediate School, as the school’s chapter of Girls Learn International (GLI) hosted an assembly celebrating the Universal Declaration of Human Rights. The GLI chapter also welcomed former RIS student Alexandra Jackman who has been advocating for people with autism since she was 10.

Human dignity was the recent focus at Roosevelt Intermediate School, as the school’s chapter of Girls Learn International (GLI) hosted an assembly celebrating the Universal Declaration of Human Rights.

Members of Girls Learn International outlined the history of the declaration including its first article, which states “All human beings are born free and equal in dignity and rights.”  At the assembly on January 10, the GLI chapter also welcomed keynote speaker Alexandra Jackman, former Roosevelt student, now a 20-year-old junior at the University of Pennsylvania.

Jackman is an autism advocate and the writer/director of the documentary, A Teen’s Guide to Understanding and Communicating with People with Autism, which she uses as a tool to teach autism awareness and acceptance at schools and organizations around the United States.

“It was a moving assembly,” said RIS social studies teacher Karen Lust who co-advises the GLI chapter with RIS science teacher Andrea Poppiti.  “Alexandra’s presentation included important messages linked to the Social and Emotional (SEL) competencies of self-awareness, social awareness and relationship skills. She emphasized to students how rewarding it can be to reach out to people they might view as different.”

Jackman told the students that meeting and getting to know people who are different from ourselves “is how we learn.”

“People are interesting.  People are funny. People are worth the effort,” said Jackman. “Human rights begins with you and you can make a difference as middle schoolers.”

Jackman is president of the University of Pennsylvania’s chapter of the Petey Green Program whose volunteers tutor incarcerated youth.  She also is president of Penn’s chapter of Best Buddies International, an international non-profit organization which, according to its website is dedicated to “establishing a global volunteer movement that creates opportunities for one-to-one friendships, integrated employment, leadership development, and inclusive living for individuals with intellectual and developmental disabilities (IDD).”

“Her message to our students was profound and empowering,” added Lust and Poppiti about Jackman who has been advocating for people with autism since she was 10.